A booklet “Memories of Lamyatt” is available for download from the Lamyatt ‘A Church Near You’ website here. 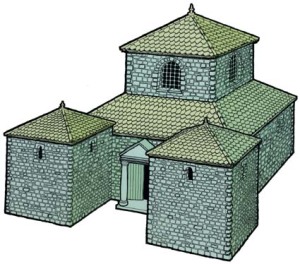 Our village here in Lamyatt has a long and varied history.  On the hills and fields around our present grouping of houses we have a few sites of archaeological interest.  There is the early Iron Age earthwork at Fox Covert, which consists of a single bank and outer ditch.  Also there is the site of the Romano-British temple on top of Creech Hill at Lamyatt Beacon.  Although nothing of the structure is visible now, it was fully excavated in the 1970s and various coins were found as well as a series of figurines of Roman gods which were used as votive offerings, of which the originals are now on view in Taunton museum.

The temple, the main part of which is thought to be from the end of the 3rd century, is east facing and consists of a nearly square cella with surrounding rooms. A sunken room off to the south contained marks of burning showing that a fire had been lit.  A cemetery to the north contained 16 graves.  A scholarly article describing the excavation of the temple site has been published by Roger Leech, Visiting Professor of Archaeology at Southampton University.  If you would like to view it left click HERE.

In the fields at the other end of our village to the west of Speeds Farm, aerial photographs have shown up an abandoned medieval village.  A survey by Bristol university suggested that there could be 15 house platforms fronting a straight road, which could have been roman, connecting the temple with the Fosseway.  One of the adjacent fields is called “Court Hayes”, which suggests that there was a more substantial building situated there.

These of course are now no more than marks in the landscape.  It is not until we get to the Domesday Book of 1086 that we get one of the first mentions of our village by name and the people. A translation reads that Nigel the Doctor held 5  1/2 hides in Lamieta (thought to mean Lambs gate) from the abbot of Glastonbury.

After that again there is silence until our baptism, marriage and death records begin in about 1608. It is from these and other documents that we begin to hear the names and a few intriguing details about previous inhabitants. These can sadden, amuse us or simply leave us longing to know more about those mentioned.  Thomas Ivileafe (what a wonderful name) is mentioned, who died in 1668 and whose table tomb has recently been restored in the churchyard.

Edward Davis is another name mentioned at around this time.  His name is one on a list of many who had their land confiscated for treason in 1652, basically for choosing the losing royalist side in the civil war.  From the register we can read that he and his wife, named Jacqette (as clearly as I can make out) had a number of young children surviving, being baptised between 1632 and 1642 – they also had 4 buried between 1641 and 1649. What happened to this family and where did they go?  We will never know.

At around this time the Pitney family is also mentioned In the registers.  They continued in the village for many years as we have a photocopy of a book bought by Matthew Pitney in 1737 when he was church warden.  The land where Apple Tree House stands was once know as Pitneys Orchard.  I have been told that this family are ancestors of the singer Gene Pitney of “only 24 hours from Tulsa” fame.

An amusing incident (although not for those involved) is recorded in the register of banns and marriages.  On Sunday 19th July 1761 the banns were read for the forthcoming marriage of William Appleby and Sarah Newport, both of Lamyatt.  The following Sunday they were read again, when as the register records, “there appeared in ye church one Jane Angel of West Pennard, who forbad ye Banns on account of Pre-engagement between ye said Appleby and herself: on which ye publication ceased and ye parties were not married.”  One can only try to imagine what ripples went round the village at this time and we probably will never know what became of the participants in this little episode.

One more amusing anecdote (from a different source) concerns Thomas Longman, a victualler.  On 20th June 1763 he was convicted of selling cider without a licence.  On 19th June 1765 he was convicted of the same offence.   Then in 1772 Thomas Longman, yeoman, of Lamyatt was convicted of swearing and cursing 100 profane oaths and curses.  Had he been yet again caught selling cider illegally, I wonder?  Cider has long been a vital part of village life and of course with our Bullbeggar, it remains important to this day.

In the 19th century the Guyon family came to be prominent here.  Charles Langford Guyon was Rector here between 1841 and 1881, living in the Old Rectory.  His son Henry Copleston Guyon was then Rector until he died in 1914.  Various plaques can be seen to their memory in the church. They frequently visited the school which ran from what is now the village hall until it closed in the 1960.

One benefactor of this era, who we must also not forget, is Christopher Welch, who died in 1915.  He donated the stained glass window, pews and lectern in the church, but undoubtedly his most noticeable memorial is the Welch almshouse.  This is arguably the most striking building in the village.  Originally the two cottages were built for the benefit of agricultural labourers who had resided in the village for not less than 5 years, were over 60 and not in receipt of parish relief.  Criteria for occupation may have changed, but they are still occupied and have been improved over the years – one of the latest improvements being increased parking space on the road side.

As to more recent history, there are fond memories of residents putting on shows, performing monologues and sketches such as “Tarzan’s Mother” or “the Mothers Union Outing”.   Carol singing round the village was another fondly remembered activity.  We still do that today. Not, however, as they used to by loading up a piano on a truck to do the rounds.

Back in 1923 Lamyatt sports were popular. A poster from then advertises among other events a slow cycle race with a first prize of 7s 6d.  Admission to the marquee where there was dancing to music provided by Castle Cary Brass Band was 6d.  Today we have our  annual fete.

We continue to celebrate national events.  Compare our Jubilee celebrations in 2012 with the the Coronation in 1953.  That was celebrated with children’s games, a coronation mug being given out, supper on the Rectory lawn, rounded off with a bonfire on Creech Hill.  So some things do not change all that much and what we do today will soon be looked back on hopefully fondly as our recent history.

The following was recently sent to us by a former resident of Lamyatt and describes his memories of Lamyatt war years.  We are always grateful to receive information on our village and extend our thanks:

My message re the troops arriving after the evacuation at Dunkirk did not mention that it was the Green Howards and Coldstream Guards, they remained for several months and carried out many exercises on Creech, using live ammunition.

My uncle, aunt and cousin visited in August 1940.  Uncle Jack wanted to go mushrooming so we set off early morning up to Creech Hill as all was well until life bullets whistled overhead.  Jack who had served in France in World War I showed us how to crawl safely down to safety.

The first action in the village was the appointment of air raid wardens.  Farmer Hunt was assisted my my grandfather Walter Greenland, they had to ensure that peoples blackout precautions were adequate.

The LDV, which soon became the home guard (Dad’s Army) was formed, they erected a hut on top of Creech Hill and manned it to watch for German paratroops. Most did not get uniforms at first or rifle, so they were armed with pitchforks. After they were fully equipped they held exercises in the old Brickyard next to Evercreech Junction.

Frances Padfield and I acted as messengers on our bicycles from the HQ in Bruton.

The social events held in Mrs Walters dairy were to raise money for the Spitfire Fund.  There was a pianist and a drummer for the dancing, an auction of things donated by the villagers took place, fruit, jams, honey, eggs cakes etc. The buyers received national savings stamps to the value of their purchases.

I cannot remember the date but it was a dark evening so must have been in the winter months.  There was a loud whistling noise.   My grandad shouted Bombs.  There was a series of loud thuds, then silence. The following morning we saw five craters in the field behind the cottages. Luckily no damage was to be found. There were no windows on the back of the buildings and the walls were 18 inches thick.

Lamyatt village and surrounding outlying farms and houses are part of Lamyat Parish. The Parish is too small to have a Parish Council but since 1894 it has held a Parish Meeting at which local issues have been debated and discussed. (Note that whilst the village name has two ‘t’s the wider parish name has only one in historical records)

There has always been at least an Annual Meeting, and on occasions additional Meetings held to discuss specific major issues. The Meeting through its Chair, and assisted by others, has been able to:

Of course some issues, such as planning developments both within the Parish and adjacent Parishes; highway and transport problems; and rights of way matters; have cropped up on a regular basis.

The Lamyat Parish history as told through the Parish Meeting minute book gives us an insight into how issues have been dealt with, and may make us realise that some have been around in some shape or form for over 100 years!

Copies of most of the previous Parish Meetings are held in archives, along with the Definitive Footpath Maps as drawn up in the early 1950’s.

Further extracts from the minute book will be added at a later date. If anyone wishes to see the original minute book and maps held by the parish please contact Paul.